Say Ello to the Hottest Ticket on the Internet

New anti-social network Ello is seeing start-up success thanks to a perception it is anti-Facebook. But it its future financially viable?

Ad-free social network Ello is seeing start-up success thanks to a perception that it’s anti-Facebook. Launched just over a month ago with only 90 members, the invite-only site is now seeing requests to join total 40,000 per hour. A limited supply and strong demand has reportedly led to invitations selling on eBay for $500. 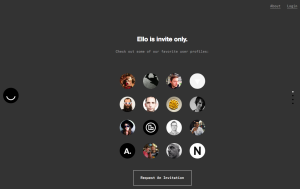 Founded by Paul Budnitz, a luxury bicycle designer and owner of artisan toy maker Kidrobot, Ello was designed for sharing artwork, whilst, of course, communicating: Tumblr meets Twitter, one could say. Co-founded by a team of seven well-known artists and programmers, the social network is trendy and minimalist: black, white and grey, with open spaces, clean lines, and bold circles.

In line with their hipster aesthetic, Ello works to make users feel more like people and less like data points. The mission statement declares: “We believe a social network can be a tool for empowerment. Not a tool to deceive, coerce and manipulate — but a place to connect, create and celebrate life.You are not a product”.

There are no ads, and there is no geo-locating or selling of data to third parties. Registration doesn’t ask for a name, gender, or sexual orientation. And users can categorise contacts as “friends” or “noise” (without anyone knowing which they are). Unsurprisingly, Ello is being called the anti-social network. 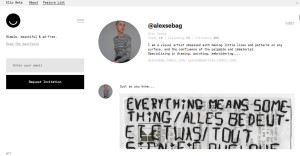 But whilst an independent and liberal ethos is certainly part of the attraction, Ello’s sudden elevation into the spotlight must be credited in some part to Facebook. In September, just as Ello launched, the social-giant banned several gay and transgender artists and entertainers from holding Facebook accounts in pseudonyms, demanding instead “real” names – the name found on a driving licence or poll-card – were used. The highly publicised outcry and ensuing revolt has seen people clamour to join a social network that they didn’t even know existed a few weeks before.

Indeed, it sounds exciting: a hipster upstart taking on the colossus that has become synonymous with faceless commercialism. But is Ello really financially viable? Facebook makes 90% of its billions in revenue from advertising. And rejecting that path has thus far failed to serve any of Ello’s tech-predecessors well; social network Path is a perfect example.

The only notable exception to this rule is WhatsApp. And to monetise the platform, just like WhatsApp, Ello plans to follow the freemium model, upselling users on special features to customise their experience. But Ello must be aware that it is talking to a market already saturated with the free-to-use models it has become accustomed to. People are less and less willing to pay to download films and music, let alone their social networking.

But it’s not putting off investors; FreshTracks Capital invested $435,000 in seed funding in March. And David Cohen, investor, explains: “Since my goal is simply to support great founders, I think there’s no issue… We’re long term investors and we fundamentally believe Ello’s vision and beliefs are good for the world”.

Building on the Buzz

The last weeks have certainly been big for Ello. But now, as the company tries to monetise, it must also work to maintain relevancy in a crowded social networking space. Ello needs to find a way to both keep its anti-Facebook, early-adopters’ attention whilst growing a popular mainstream user base.