Nuclear Fusion: The Dream of Clean and Limitless Energy

Since the 1950s scientists have been working on achieving nuclear fusion. And after billions of dollars spent one team have moved a step closer.

Energy from fusion – a process where hydrogen atoms are forced or fused into one helium atom which gives off tremendous energy – has huge potential to provide the world with a safe, waste and emission free, cheap, efficient, and near-limitless source of energy. And so achieving fusion, and recreating what the sun does but here on earth, has been the goal of physicists for more than half a century; since 1953 the US has invested $29.1 billion. But the technical difficulties in creating ignition – the point at which fusion releases more energy than it consumes – have so far proved too big.

Finding Ignition with a Tokamak 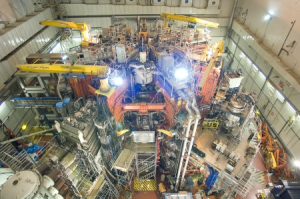 The JET device pictured in 2007. Operating since 1983, JET is the world’s largest and most powerful magnetic fusion experiment. JET is located at Culham, UK and operated by Culham Centre for Fusion Energy on behalf of its European partners, under the European Fusion Development Agreement.

There are two key methods for creating the ignition. The first is magnetic confinement where hundreds of cubic metres of deuterium and tritium plasma (DT plasma) are confined by a magnetic field and heated to fusion temperature. Tokamaks – designed in 1951 by Soviet physicists – are considered the most promising magnetic confinement system and utilise a doughnut shape. Several tokamaks have been built, most notably the Mega Amp Spherical Tokamak (MAST) in the UK, and the Joint European Torus (JET), which has already been able to produce 16 megawatts of fusion power. The International Thermonuclear Experimental Reactor (ITER) – a research reactor currently under construction in Cadarache, France, funded by a multinational initiative from the US, China, the European Union, India, Japan, the Republic of Korea, and the Russian Federation – will be the largest tokomak in the world once complete. But the 500 megawatt facility (the equivalent to a small power plant) which promises so much hope has been mired in delays and escalating costs: it looks set to come in at $50 billion, which is about 10 times the original estimate, and it will not begin its first experiments until 2027, 11 years behind schedule. 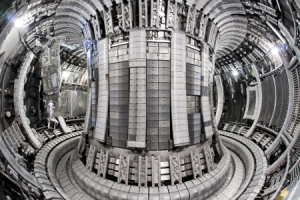 The JET vacuum vessel pictured in 2011. The remote-controlled mascot servo-manipulator is shown inside the vessel.

But whilst ITER is consuming much of the fusion-energy budget, there are a dozen or so other start-up teams pursuing alternative designs. The company attracting the most attention is California-based Tri Alpha, founded by physicist Norman Rostoker in 1998. It has so far raised $150 million in investment from a group including Microsoft co-founder Paul Allen, Rockefeller’s Venrock, and the Russian government’s venture-capital firm, Rusnano Group. Arno Penzias, the Nobel Prize winning physicist that confirmed the Big Bang, is a board member. Again working on magnetic confinement, Tri Alpha is instead testing a linear reactor in place of the doughnut shape. The team claims it will lead to commercial fusion power in little more than a decade.

A Breakthrough in Ignition

The second key method for creating ignition is inertial confinement, a newer and more exotic line of research where laser or ion beams are focused directly on a pellet of fuel which is chilled to -255 degrees. The lasers heat a fine exterior coating of DT plasma, and when the layer explodes it creates an inward-moving implosion that generates as much heat as the sun. The leading inertial confinement research is being done by the $7 billion National Ignition Facility at the US Department of Energy’s National Laboratory in California. Construction began in 1997, although the facility was not completed until 2009. But after years of quite public failure to achieve ignition the researchers have achieved a world first. Using 192 lasers, which cost some $3.5 billion to build, the team have announced that on four separate occasions they have now seen the amount of energy generated through the fusion reaction exceed the amount of energy the nuclear fuel absorbed. The ultimate goal to produce more energy than the whole experiment consumes remains a long way off. The team will need to roughly double the pressure that acts on the DT fuel to achieve true ignition. And they will need to produce a hundred times more energy from the fusion reactions before the process can run itself and create a surplus of energy. But after decades without progress, the team at the NIF has taken a crucial step in creating ignition. And perhaps they have helped put to bed the claims that fusion is the science of wishful thinking.