Press-shy Pony Ma, CEO and founder of the fourth largest Internet company in the world Tencent, is making his move for global expansion.

Whilst the West has been wrapped up in its home-grown Internet giants, China has quietly been at work on one of its own. And it might just be one to top them all.

With a valuation of more than $140 billion and the accolade of being China’s largest publically traded Internet company, Tencent runs a suite of online and mobile services from gaming, social networking, commerce and payments, to web portals and instant messaging. Having secured the Chinese market, it is now looking to the West. 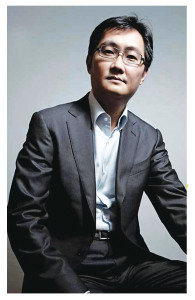 But whilst the company is quickly gaining notoriety, very much less is known about its founder, Ma Huateng, or as he is known in the West, Pony Ma.

A product of modern China, he was born in 1971 in the middle of the Cultural Revolution. But he entered Shenzhen University to study computer science at the time when China’s new leader Deng Xiaoping – who ridiculed the Cultural Revolution slogan that it was “better to be poor under socialism than rich under capitalism” – was driving his country in a new direction towards a market economy and towards business. Seeing a growing number of young users on the web, Ma chose the Internet. And he founded Tencent in 1998 with four classmates from university. He has since quietly built Tencent into the world’s fourth biggest Internet company.

Tencent’s first product was QQ, an instant messaging service that quickly grew to count more than a billion users. The company, which is known for updating its offering almost monthly to keep users hooked, then launched a series of social, gaming, and payment platforms, and most recently – spotting the trend to mobile – added the now equally popular service Weixin. The mobile-only feature-laden text and voice messaging app launched in 2011; it already has more than 355 million users and an estimated worth of $64 billion.

The company has also invested in Chinese taxi-booking app Didi Taxi, which is linked to another of its newer services Weixin Payment, which launched in 2013 and saw more than 200 million users sign up in its first fifteen days. And in the same year Tencent moved into search, with the acquisition of a 36% stake in Sogou for $448 million.

Tencent makes its money predominantly from online games (selling virtual goods, weapons, access to VIP rooms, and gaming power) and also from monetising emoticons, storage space, and ringtones. It’s a strategy that is working: in 2012 Tencent’s revenue beat Facebook’s by over $2 billion, and experts forecast that Weixin alone will make $1.1 billion this year. With a 10.4% stake in the company, in January 2014 Ma took the title of China’s richest man (although he has now been bumped to second place). His net worth is estimated at $13 billion.

And now Ma is going global. With Weixin rebranded as WeChat to appeal to an international audience, the company has spent $200 million on global advertising in the past few years. By last summer WeChat had gained more than 100 million users outside of China, with particular success in Southeast Asia, India, South Africa, and Spain. That makes it the fifth most popular app in the world ahead of Twitter and Skype.An advertising campaign starring Argentinian footballer Lionel Messi and an office in the US have continued the push.

Yes, in America WeChat certainly still lags behind rival WhatsApp. But as Tencent makes its next moves over the coming months, its sheer size will make it a frightening competitor. And perhaps this company from the East is in the position to change the global dynamic of Internet companies.