SecretSales.com, the UK’s largest online private shopping club with over 3 million users, is predicting its first year of profit after almost 7 years. 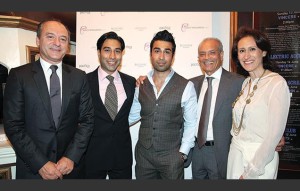 Secretsales.com’s : Sergio Dias, Nish Kukadia, Sach Kukadia, Michael Cody and Silva Cody treated the winners of a competition on their site to an evening at The Play Room bar in London’s Soho.

Now based in Notting Hill, London, with a staff of over 100, SecretSales.com started out in a basement service room in Park Royal, surviving off a Ł100,000 bank loan guaranteed against the founder’s homes. In the first two and a half years Kukadia reports “each of us took less than our lowest paid member of staff. We were living on a shoestring, working in a bootstrapped business, wondering why we were doing it”.

Initially they built a site that could cater to 30,000 members, their target number for the first four months of business. But within four weeks they had the 30,000 members. And whilst competition almost immediately arrived on the scene, SecretSales.com was starting to attract attention.

In early 2010, SecretSales.com secured significant investment from Brands4Friends, Europe’s leading online private sales company. Then December of the same year saw eBay acquire a large minority interest in SecretSales.com as they purchased Brands4Friends for just under $200 million. Although eBay has no rights or direct involvement with SecretSales.com, the acquisition accelerated a further multimillion pound financing round. In January 2012 SecretSales.com held their fourth round of funding, which raised Ł6.3 million from a syndicate of investors led by Doughty Hanson, Pentech Ventures and OCP innovation.

According to eBay’s own research, private shopping clubs now account for around 20% of online fashion sales in Europe. Paris-based Vente Privée – the flash-sale founder, which launched in 2001 – recorded a gross turnover of Ł1.1 billion in 2012, a 22% increase on the previous year. But whilst 2012 saw SecretSales.com grow their total sales 22% to Ł10.8m, the company made a loss of Ł3.9 million. They are set to record another year of loss for 2013. But that is set to change this year.

Kukadia, who says SecretSales.com is a volume business with profit dictated by membership, estimates that 3.5 million to 3.6 million users would see them break even. Last year’s first SecretSales.com TV advertising campaign, which invigorated membership and built confidence and credibility in the brand, was the first step in realising this aim.

They have also launched loyalty schemes and plan to move their partner brands more upmarket, in moves to appeal to their key user base. Thanks to their recent significant investment round, they have been pouring finances into developing CRM technology to deliver more relevant offers to users. And they are working on a SecretSales.com app to be launched early this year. And so having set strong foundations for the business, it’s finally time for SecretSales.com to see rewards.