Crowd-funding is on the rise: estimates suggest $5 billion was raised for projects last year, up from $2.7 billion in 2012, and $1.5 billion the year before. But unlike crowd-funders such-as Kickstarter, Pave, founded in 2012 in New York by Britons Sal Lahoud and Oren Bass, is a new kind of crowd-funding platform that turns, not ideas or projects, but human talent into an investable asset class.

To secure funding approved Pave candidates (Talents) who have made it through the strict selection process that sees a mere 5% retained, post their profile and pitch on the site. Prospective investors (Backers) select the candidates in whom they would like to invest. In return for their funds, Backers then receive a percentage of the Talent’s pre-tax income, over an agreed period of time, typically between 5 and 10 years.

This percentage is set according to Pave’s proprietary income model – a system developed in collaboration with Yale University’s Labour economist Jospeh Altonji, that predicts potential future earnings of each Talent –, which aims to provide Backers with a 7-8% annual rate of return. 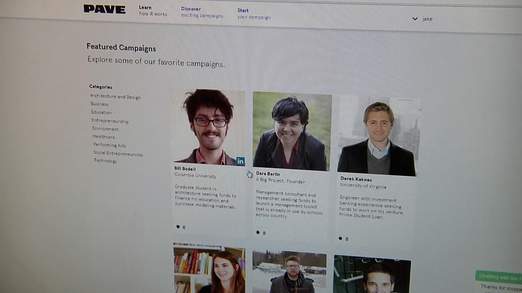 Pave has created a system where Backers are taking both the full risks and the full rewards. Talents aren’t required to make annual payments if they are in full-time education, take a year to start a new company, or if annual income falls below 150% of the federal poverty line, offering them more flexibility and headroom than debt. However, although a Talent can’t share more than 10% of their future earnings, there is no cap on the actual figure that can be repaid, meaning investors have the potential to be highly rewarded for their risk. Protecting highly successful Talent from overpaying, there is an added clause allowing them to terminate their agreement early against five times the initial amount raised.

One of Pave’s own backers also commented to the New Corner that “Talent is a “de-risked” asset class, to a certain extent”. “The majority of Talents need income to make a living, and so are therefore less likely to fail than companies, projects or products.” This increases the attractiveness for investors.

But at the same time as making attractive returns for Backers, Pave is offering Talent opportunity. As student debt levels approach more than $1.2 trillion and the unemployment rate of young graduates soars, Pave’s Talent are using the money to repay debt, fund their higher education, finance their own companies, or produce feature films: they are funding their futures and their ideas; and all of this, free of debt obligations. Pave also offers the opportunity to source funding for projects which a traditional bank would likely reject: ideas with a charitable or philanthropic take. And with the support of the Backer, who clearly wants to see their investment succeed, Talents are increasingly offered a mentoring and guiding hand, and the introduction to a whole new network.

We shall certainly be watching Pave’s progress with great interest.