Just what are modular robotics? The easiest way to describe them is that they are robots that consists of different parts (modules) which can be reconfigured to create a robot with new or additional uses. In some cases, the robots are autonomous to an extent and can carry out the reconfiguration themselves.

Sounds like science fiction? Yes, a little, but we’re not talking the human-like robots from I, Robot here. Or at least, not yet. We’re talking about industrial robots and robots that can be used for sea or space exploration. The space exploration part has a lot of scientists very excited. While the reality of this aspect of modular robotics may be many years off as yet, NASA teams are already diligently working towards that reality. In fact, they see modular robots as being a necessity for deep space exploration and possible colonisation of some of Earth’s neighbours. When cargo space – and weight – are essential factors in space journeys, the idea of a multi-purpose modular system that can be adapted to different tasks including vehicles becomes the core of long-term plans.

Mark Yim: The ‘Big Name’ In the Area of Modular Robotics

But back to reality for now. Modular Robotic Systems (MRS) are nothing new. They first appeared in the 1980s in the shape of manipulator arms in industrial settings where they could be fitted with new modules as tasks demanded. The ‘big name’ in the area of modular robotics is Mark Yim, whose work at Stanford in the early 1990s popularized and spread the concept. Yim is the leading light in this area of robotics and his ideas and work began with simple modular systems and gradually developed into the idea of not only self-configuring – and refiguring – robots, but also self-assembling ones. 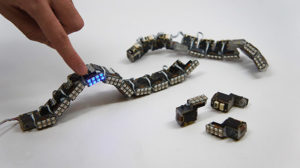 More recently, he has been working on the development of flying units. But perhaps his most important work, that will be a crucial part of how successful these ideas will be, is on task specification. It’s all very well building the physical body of these modular robots – or bodies to be more exact – but unless there are software programmes that can properly specify different tasks so that the robot carries them out successfully, then they will remain semi-autonomous tools.

Planning remains the central problem faced by scientists and engineers. Much of the work being carried out currently focuses on this and the two other main challenges of design and optimization. The process begins by identifying these problems and their particular characteristics then working – slowly and gradually – towards finding and creating solutions. Much of the work revolves around what are seen as the four main parts to MRSs: the properties of the module itself, how it receives, perceives, shares, and acts on information, how it approaches and carries out tasks, and how it deals with environment.

This latter characteristic has major implications for future plans of space exploration, but in the near future, the scientists are looking at the potential of an MRS to be part of rescue missions in dangerous and harsh environments. The idea of using specially designed MRS units in USAR (urban search and rescue) missions has been being developed for some time.

A Long Way from the Simple Manipulator Arms of The 1980s

The potential of units that can search the confined spaces of collapsed buildings or the confines of sewer pipes after a trench collapse is one that has associated services very excited. It could save many lives but also recover bodies quicker – and more safely – than traditional methods, something that can be crucial for both health and religious reasons. With these types of MRS, autonomy is not as demanding a factor as they can be operated remotely from a safe distance, though autonomy would allow for greater efficiency as many of these expert search and rescue teams usually only number around 10-12 people.

For industry, the ability to be able to reconfigure MRS units to perform different tasks – for example, on a car production line – offers savings in both efficiency and costs. Task specification is simpler than in some other areas being looked at and manual reconfiguration would be relatively simple.

One thing is for sure: the area of MRS systems has come a long way from the simple manipulator arms of the 1980s. The real challenges now lie not in the physical aspects of these systems but in creating AI programmes that can manage both tasks and also autonomous reconfiguration. The future may not quite be here yet but it is certainly getting closer.