How Vice, the counterculture go-to site for the millennial audience, became a media giant worth an estimated $1.4 billion

Founded by Shane Smith in Montreal as a small counterculture magazine in the mid-1990s, Vice has become the go-to site for the millennial audience and a digital media giant worth an estimated $1.4 billion. But how has Vice secured a soaring financial path while remaining true to the values of its youth-focused audience?

Vice was founded in 1996 by Shane Smith alongside the rather more attention-shy Suroosh Alvi and Gavin McInnes with a $5,000 investment from their parents. Its origins are in the underground music scene, as a magazine originally given away for free on the street.

But over the past two decades it has become a digital media brand: Vice Media as the global magazine has been joined by a weekly documentary series with HBO, a record label, a book, a website with multiple verticals including politics, tech, music, fashion, and food, and an ad agency which sells the counterculture-cool Vice audience to major corporate brands such as Nike and Dell. Smith has also aggressively pushed into video, adding an online youth-focused TV network covering music, art, technology and mixed martial arts, and some of YouTube’s most popular channels.

“20 years ago we were the hipsters’ bible and all that crap, and then we went online, and famously, or famously at least in Vice lore, we reinvented ourselves,” says Smith. “We let our very high-profile editors go. We handed the thing over to kids straight out of school and let them run our magazine. And that has allowed us to become this Gen Y platform. It took us 10 years to get to a million copies of the magazine, and it took us one year to get to 10m uniques [online browsers] a month.”

It’s been a very successful strategy, and Vice has built a loyal, young, and predominantly male audience around the world. Counting all its web platforms, Vice hit 96 million unique visitors in August. And when the count extends to include 2.2 billion YouTube views, and the people watching via Snapchat Discover or on mobile through Rogers Communications, Vice claims to reach between 250 million and 300 million people a month. The company now has 35 offices around the world, over 800 full-time employees, and generated revenues of around $175 million last year, about six times as much as the Washington Post and only a little less than the New York Times. Some predict annual revenue could reach $1 billion by 2016. 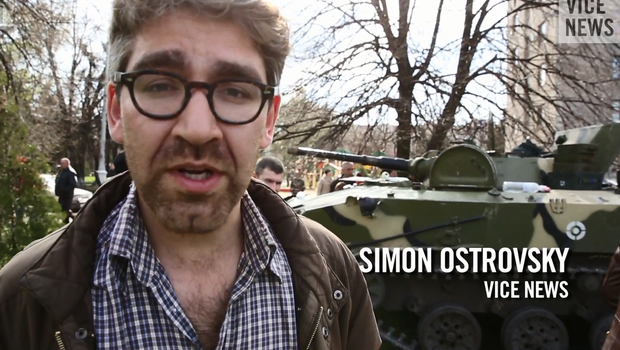 Vice News has reported from around the world in places like Ukraine, shown here.

So far Vice has done all this while staying true to its roots, something it has predominantly achieved through a dedication to strong, authentic content which treats its readers as intelligent. Vice tackles the hard hitting and divisive subjects, reports from war-torn locations and slums, and focuses on issues and places that tend to be neglected by the “mainstream” media. Readers are taken to Libya, Pakistan, Iraq, Ukraine, Sudan, Siberia, the jungles of Central America, Antarctica, or North Korea, from where Vice has reported twice, first in 2008, and then on a recent visit with former NBA basketball player Dennis Rodman during which Rodman befriended Kim Jong-Un.

Joining forces with the establishment

Offering up Gen Y, online, social, mobile, global, scaled, and monetised, unsurprisingly, everyone wants in. In 2013 Rupert Murdoch’s 21st Century Fox announced it had taken a 5% stake for $70 million. And along with signing up to Murdoch, Vice is also funded by Sir Martin Sorrell’s WPP advertising group, merchant bank Raine, and Tom Freston, a former Viacom executive and MTV founder (although Vice’s management still holds 78% of the company). The company is not quite as counter culture as its audience might like to think.

And Vice’s money-making strategy is no-less anti-counterculture. Smith comments: “Basically, we concentrate on making money in as many ways as we can”. Vice’s advertising strategy is multi-fold, starting with its own advertising agency, Virtue, which works directly with brands on strategy and campaign. Vice then creates the content, provides the media on which the content appears, and, “activates” that content through its network of sites. “Most companies concentrate on one form of revenue in one country. But we concentrate on five forms of revenue in about 50 countries, which is fine for us. We’ll take it,” says Smith.

Smith is aware that Vice’s success can’t last forever, recognising that whether in ten or in twenty years, something cooler will emerge to claim its place. But for now, it looks like he’s making as much of it as quickly as he can.