As the Silicon Valley tech boom invades the Bay Area, housing shortages and congestion prompt many to consider leaving the region.

What’s the point of living in the beautiful San Francisco Bay Area if you can barely pay the rent and have to waste time on a long commute?

That’s what a lot of residents are asking as housing costs and traffic congestion spiral.

Fully one third of Bay Area residents said they are thinking about leaving the area, according to a 2016 poll by The Bay Area Council, a public policy advocacy group sponsored by businesses in the region.

As the tech boom expanded from Silicon Valley to the Bay Area, developers and entrepreneurs flocked in to work on innovative new digital products and services and to seek their fortunes in startups. But housing and transportation have failed to keep pace.

At least one entrepreneur recently called it quits.

Andrew Gazdecki said he moved his company, Bizness Apps, from San Francisco to San Diego this spring to cut costs. The six-year-old company, ranked one of the fastest growing startups in America by Inc., bills itself as the leading app builder for small businesses.

Gazdecki said he was reluctant to sign a long term lease for office space in San Francisco because it has surpassed New York to become the most expensive city in the country. Plus, he said, the saturation of tech companies in the region was slowing Bizness Apps’ growth, because competition for top employees was so fierce.

Much lower cost of living

Gazdecki said he found that it would cost about $4,900 a month to maintain a standard of living in San Diego that would cost $8,100 in the Bay Area and Silicon Valley. That would include a two-bedroom apartment renting for more than $4,500 in San Francisco vs. a comparable apartment in San Diego for $1,800.

“From an employer perspective, reducing your employees’ cost of living essentially equates to giving them a 30% to 50% raise,” he said. “It’s hard to pay the salaries San Francisco demands.”

Benefits of the move? Operations costs dropped by 14% even though the company gained ocean views in much larger San Diego offices at less than half the price of San Francisco rents.

He said the move also enabled him to hire two vice presidents the company had struggled to recruit to live in San Francisco, he said. Employees saw their rents reduced by an average of 37% and average commutes reduced to less than 30 minutes.

With these savings, profitability has increased by 21%, he said.

The potential to grow was an important consideration, according to Gazdecki, who realized his small company would struggle to recruit top talent in competition with larger companies in the Bay Area.

“I found myself realizing I would be a far more attractive employer in a less competitive environment,” he said.

San Francisco’s housing shortage has been rising in recent years as the Silicon Valley tech industry expanded in the City by the Bay. Among other factors, housing policies are at odds with tech growth. 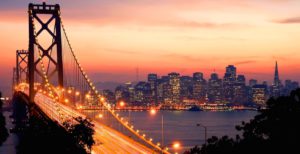 Only about 4,500 new housing units were built in San Francisco between 2010 and 2013, while the population grew by an estimated 32,000 people. Meanwhile, property owners have pushed to restrict housing stock because it raises the value of their property.

In nearby Mountain View, the city is discussing an office development that would bring 42,000 workers to town, but its zoning plans will allow only 7,000 new homes to be built by 2030.

The 2016 Bay Area Council Poll found that 84% of residents believe the region needs better transportation networks between the Bay Area and the outlying Central Valley. 60% said any new housing should be built outside the immediate region.

Jim Wunderman, president and CEO of the Bay Area Council, said that approach would not solve the problem of affordability and the growing lack of economic diversity in San Francisco. Wunderman also said longer commutes also would increase damaging carbon emissions.

Meanwhile, traffic congestion has already become so severe that more than 80% of those surveyed said they did not think it would ever improve. More than half say it has gotten harder or much harder to get around, more than double the number who said that just two years ago.

The result is a growing number of residents who want to leave. The poll found that one third said they were likely to leave the region within a few years – the majority of them more recent arrivals who came with the tech boom.

It remains to be seen whether more entrepreneurs will follow Gazdecki out of the region. Wunderman says that possibility is an urgent problem.

“Do we expect to see more than 2 million residents up and leave? Of course not. But losing even a fraction of that number and the talent they represent because we failed to deal with our most pressing issues would be very bad.”