Iskandar Safa, CEO of Privinvest: Managing a leader of the naval construction sector

He intrigues, fascinates and seems to be a man of dreams. His name: Iskandar Safa. Relatively discreet and not very inclined to communicate, Iskandar Safa is better known for his relationships as a businessman than for his work as the head of one of the world’s premier naval shipbuilders.

Born in 1955 in Beirut, Lebanon, Iskandar Safa graduated from the American University in Beirut with a degree in Civil Engineering in 1978. He then moved to the United States to begin his career in the public works sector, followed by a few years in Saudi Arabia. Settling a few years later in France, Iskandar Safa continued his education pursuits at INSEAD (Fontainebleau, France), graduating in 1982 with a Master of Business Administration.

Iskandar Safa founded Privinvest Group with his brother Akram over two decades ago. Today, Privinvest is one of the leading privately-owned shipbuilding groups in Europe and the Middle East, with major naval and civilian clients around the world.

Why did you decide to begin investing in the naval construction sector?

Iskandar Safa – In the 1980s, I wanted to pursue a different direction after having already familairised myself in the sectors of international trade and public works both in the Middle East and around the world.

It was during this time that I started becoming more interested in naval construction, although it is a sector that’s always been a passion of mine. In Lebanon, my family’s home is not too far from the sea, and I’ve always said that my passion for naval construction and maritime activities probably stems from my Lebanese roots.

I don’t know whether this passion was necessarily a guiding force for me, but in 1992, we had the opportunity to take over our first naval project that initially faced a number of problems: Constructions Navales de Normandie (CMN) in Cherbourg. Even with the setbacks, we could say that this first experience was a success. We were able to relaunch CMN’s activities in the region, which allowed us to keep jobs and valuable know-how.

With this success in Cherbourg with Constructions Navales de Normandie, we then realised what strong potential was ahead of us: the ability to develop on an international scale in peak industries such as naval construction, and especially with projects and companies that strive for innovation and personalised service for each of their clients. We thus laid our sights on investment in naval construction in Europe and the Middle East. This strong potential was confirmed in the 90’s with the emergence of new actors in emerging economies and the reinforcement offered by the growing globalisation linked to maritime trade.

How do you manage such a large group like Privinvest?

Iskandar Safa – Privinvest is a company working on an international scale in conjunction with its subsidiary holdings in different regions of the world:

I find it important to recall the expansion of our activities around the world, as this allows our representatives to better understand Privinvest’s guiding philosophy and its operational capacity.

We are a decentralised company which draws upon the talent of our various teams that are experienced and specialised in their domain in order to provide the best service possible to our clients, no matter what their needs are. Research and innovation are also a part of our DNA, as these are the determining factors leading to the success of a technical industry such as our own.

Today, I feel truly lucky to be able to call upon high-performing and high-achieving teams and individuals, who are in their own right leaders of their own domain. Privinvest is first and foremost a collective, collaborative adventure and success that feeds off this diversity and synergy. I will never forget this.

What are the next challenges that Privinvest faces?

Iskandar Safa – Privinvest has always had the ambition to grow and develop its activities in all corners of the world. This, of course, can be accomplished with the signing of new international contracts, but also with the preservation of two cornerstones of our identity:

In today’s world — an interconnected world moving quicker and transforming faster than we could have ever imagined — only the industries that continually adapt and constantly innovate will last through the test of time. This is a certainty.

Beyond this global analysis, over the past several years we have given considerable attention to the development of renewable marine energies. Committing to durable development is just one of the ways in which we are working towards our drive towards constant innovation and adaptation that I mentioned before.

Privinvest will continue to grow and innovate in order to remain a leader in the sector of naval construction. At the same time, we hope to make Privinvest and its subsidiaries points of reference in the field of renewable marine energy. The sea holds astounding potential — not only in terms of natural resources, but also in terms of energy. It’s a resource that we must make the most of for the sake of humanity, while protecting it at the same time.

In France, with Constructions Navales de Normandie (CMN), we are already showing our drive and will to position ourselves firmly within the sector of renewable marine energies with our participation in a project that will build a water energy farm of 39 turbines in the Rhône Valley by 2018. This project, in conjunction with the Compagnie Nationale du Rhône (CNR) and Hydroquest, a French manufacturer, is symbolic of the ambitions of a group like Privinvest. 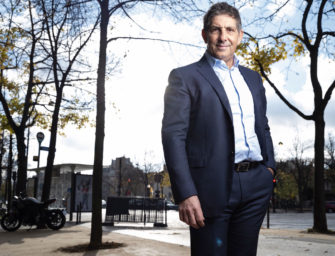