The Piketty Phenomenon : A Portrait of Thomas Piketty, Economist

Predicting worsening inequality and offering up radical solutions, the new rock-star of economics Thomas Piketty has rewritten the history of wealth inequality in his surprise best-selling tome “Capital in the Twenty-First Century”.

200,000 copies sold; a position on the New York Times Best Sellers list for the past thirteen weeks; Amazon cupboards temporarily bare; and debated and discussed in national newspapers and blogs across the world: economics has officially gone viral.

The surprise best-seller, Capital in the Twenty-First Century, is a 700-page economic manifesto – dense with data, footnotes, graphs, and equations – written by young French economist Thomas Piketty. His key message is that Western-style capitalism inexorably creates inequality of income and wealth.

The Central Contradiction of Capitalism 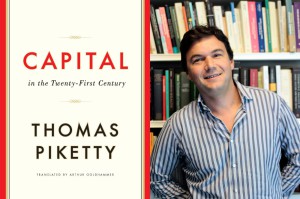 Working to uncover key economic and social patterns over time to answer the question of wealth inequality, Piketty and co-authors Emmanuel Saez and Anthony Atkinson collated, detailed, and analysed two centuries worth of empirical evidence from 30 different countries.

From this exhaustive examination of economic data, Piketty – a professor at the Paris School of Economics, and graduate of both the Ecole Normale Supérieure and the London School of Economics – saw a pattern emerge whereby capital, and the money that it produces (or in other words, the rate of return on investments) accumulates faster than the rate of economic growth in capital societies.

Because capital is disproportionately held by the rich, Piketty therefore explains that the fortunes of the rich grow at a much faster rate than earned wealth, which can only grow at the same rate as the economy. This in turn creates an elite class of inherited and accumulated super-wealth.

Challenging one of the central justifications for the capitalist system, Piketty concludes that inequality therefore rises when the rate of return on capital is greater than the growth rate of the economy as a whole; it is what he calls “the central contradiction of capitalism”.

Piketty warns that the decades of the 20th century that saw reduced inequality were both temporary and artificial. The period saw a higher than normal rate of population growth accelerate economic growth, at the same time as two world wars and the Great Depression reduced or destroyed the value of private capital. Now, Piketty says, his research shows inequality in the US and Europe is in the process of rising back towards pre-World War I levels, and is doing so rapidly.

The Rich Get Richer

Since the 1970s – a period which has seen economic principals of the West focus on eliminating estate tax, cutting top income tax rates, and legislating low taxes to attract investment – the share of total pre-tax income earned by the top 1% of Americans has more than doubled, the top fifth has seen income grow 60%, but the poorest fifth has barely shifted. Globally, using data from the Forbes rich list which launched in 1987, the wealthiest have seen an economic growth of 6% – 8%, whilst the global economy has seen a growth of just 2%. In other words, the wealthiest tiny elite are getting wealthier around three times faster than the world economy, as they claim more and more of the world’s wealth.

Inequality, once it reaches a certain level, of course detrimentally effects society, both politically and economically. And Piketty believes that this current situation cannot be sustained for much longer unless radical action is taken to halt the process and redistribute income and wealth.

Piketty has a radical solution: a (“utopian”) global tax of between 0.1% and 10% on capital such as land, property, natural resources, stocks and so on. He also suggests an 80% tax on the highest earners, along with enforced transparency for all bank transactions, and a use of inflation to redistribute wealth down. “I argue for a progressive tax, a global tax, based on the taxation of private property. This is the only civilised solution”.

It is a popular proposal; the distribution of wealth has dominated the mainstream consciousness, particularly since the Lehman Brothers crash.

But popularist rock-star of the moment he may be, his thesis has not been received without some academic debate. The Financial Times published a collection of articles accusing him of both utilising flawed techniques in his historical-data analysis, and of making mistakes and modifications to data without consistent justification. Martin Feldstein of the Wall Street Journal has written that “his thesis rests on a false theory of how wealth evolves in a market economy, a flawed interpretation of US income-tax data, and a misunderstanding of the current nature of household wealth”. He has also been accused of cherry-picking data-sets, particularly in his study of Britain. Piketty acknowledges that some of his data sources are imperfect, but also adds he had to work with the data available.

All the same, Hillary Clinton is still a fan, and Branko Milanovic, a former senior economist at the World Bank has hailed Capital “one of the watershed books in economic thinking”. But perhaps most importantly, Thomas Piketty has reshaped and reignited debate for the next generation of thought on inequality.