The Making of a CEO: Reed Hastings, CEO and Co-Founder of Netflix

From selling hoovers door to door and volunteering in the Peace Corps, to a $23.3 billion company, 53-year-old Reed Hastings has been the darling of Wall Street and its duff.

Reed Hastings – co-founder of $23.3 billion flat-rate DVD by mail and on-demand internet steaming company Netflix – is a CEO who has revolutionised the entertainment industry and the nature of modern broadcasting. He has also created a model for business culture that inspires entrepreneurs across the world. Now a board member of Facebook, previously one at Microsoft, and a philanthropist who has invested millions in education, Hastings has, so far, proved his disbelievers wrong.

His early years are somewhat surprising. Born in Boston, Massachusetts, he spent his first year out of school selling hoovers door-to-door. And then following a degree in mathematics at Bowdoin College, and an erroneous decision to register with the Marine Corps, 1983 saw him join the Peace Corps and travel to Swaziland. Whilst officially teaching maths in a high school, Hastings seized every opportunity presented to bring innovation to his new-found community. And after two years, and the successful introduction of honey-harvesting from African killer bees and reformed water-collecting facilities, he returned to take a Master’s degree in computer science at Stanford University.

He founded his first company, Pure Software, in 1991. And acquired in 1997 for $750 million, financially the venture was a storming success. But Hastings wasn’t happy. He comments, “It was chaos… While sales were doubling every year through most of the ’90s, turnover in Pure’s executive ranks was enormous. Meetings were combative.”

He decided that any further company he set-up would be one of which he could be proud, with a culture where he enjoyed working every day, and with people who pushed him intellectually. Now laid-out in a 128-page PowerPoint presentation that has been viewed more than 5.5 million times, Hasting’s cultural model, “Freedom and Responsibility Culture”, is almost as far-reaching as Netflix itself.

Innovating, Risk-Taking and Driving Ever Forwards

Now available in 41 countries worldwide, membership has just passed 44 million, following a year that saw Hastings drive Netflix into new markets, with a focus on expansion in Europe. In accordance, stock prices surged 298% to $333 from the beginning of 2013 to the end. 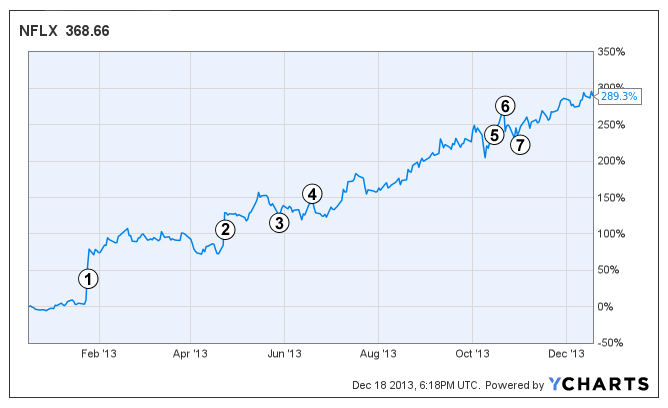 And this expansion is just an example of the defining characteristic of Hastings success. That being his ability to drive his company forwards no matter the risks, to always adapt, and to see future trends before customers even know they exist.

In 2011, he cut apart and re-built the business in order to improve. Originally founded (in 1998 with Marc Randolph) as a service offering flat-rate DVD film rental by mail, Hastings sensed the rise in YouTube popularity meant something more and so he launched a new service, streaming over the internet. Whilst the action, and the price hikes that came with it, saw Netflix stock drop 80% to a value of just $60, and $12 billion wiped off their capital as they lost 800,000 members, Netflix is now the world’s leading streaming service, and the feature accounts for about 90% of their usership.

The launch of Netflix own television series – such as acclaimed House of Cards – with episodes released binge-style simultaneously for the first time, is just another example of his ability to innovate the market.

But whilst stock prices are now at a high of $387, the story of Netflix and Reed Hastings has nothing to do with that number. This is a story of cultural change, and we should all be excited to see what he thinks of next.