As more states legalize marijuana, a two-year-old Los Angeles startup announces a new partnership with Microsoft to help government regulators track cannabis growers and vendors and make sure they are complying with state regulations.

When Microsoft decided to venture into the country’s budding marijuana industry, the software giant turned to KIND Financial, a Los Angeles start up that provides software tools for cannabis growers and vendors.

With KIND, Microsoft said it would make available to governments digital cloud tools that will enable them to track cannabis growers and vendors and make sure they are complying with state regulations.

While marijuana use is still illegal under federal law, 25 states and the nation’s capital have made it legal for medical or recreational use, according to Governing Magazine.

Microsoft is the first major corporation to place a bet on the country’s marijuana industry. With this action, Microsoft breaks a longstanding taboo to stay away from a controversial product, following smaller tech companies into an increasingly competitive – and potentially lucrative – field. The move also may be opening the door to creation of a large-scale regulatory infrastructure as the marijuana industry grows.

KIND is one of a growing number of startups that provide financial services to the $6.7 billion marijuana industry.

CEO David Dinenberg said he started KIND in 2014 to provide financial services to marijuana companies after he learned that the industry did not have any bank accounts, credit cards or other services that are typically provided by banks.

Since marijuana is still illegal under federal law, and the federal government regulates banks, they are open to potential seizure if they take money that results from an illegal act. While President Obama has given banks the OK to work with the industry as long as they monitor for money laundering, most banks still won’t work with the industry.

As a result, 70 percent of the cannabis companies do not have bank accounts or access to traditional credit. Instead, most dispensaries operate as cash businesses.

So Dinenberg, a former real estate developer whose business crashed during the recession, had the idea for a company that would be sort of a Bank of America for weed. 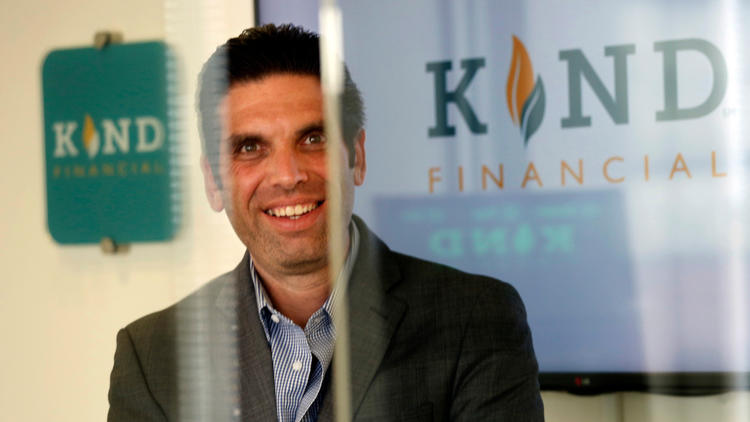 That vision has expanded. KIND’s primary product is Agrisoft, a software product that helps growers, production facilities and dispensaries report their inventory and tax information to state and local regulators and make sure they are complying with government regulations.

“We track the plant from the day it is planted to the moment it is bought by a consumer,” Dinenberg said.

Agrisoft is paired with KIND’s other product, the KIND Kiosk, an ATM-like technology for cash management that gives marijuana access to their money.

KIND and Microsoft now will offer the government similar tools for tracking pot companies and monitoring their compliance with the regulations. This is important because states that have legalized marijuana use have generally set strict regulations about who can grow and sell marijuana and they have also imposed hefty taxes on sales.

The software will run on Microsoft’s cloud platform, Azure. Kimberly Nelson, the executive director of government solutions at Microsoft said KIND agreed that Microsoft’s platform was the only one designed to meet government monitoring standards, Nelson said.

Microsoft is betting the marijuana industry will continue to grow in complexity and size.

While medical marijuana has become widely accepted, recreational marijuana is legal in only a handful of states.

California was first to legalize medical marijuana two decades ago. Alaska, Oregon and Washington approved similar measures two years later. Since then, more than 20 more states have made legalized it for medical purposes.

The District of Columbia and four states – Alaska, Colorado, Oregon and Washington – have also legalized marijuana for recreational use. Nevada will consider a ballot initiative to legalize recreational use later this year.

Microsoft co-founder Bill Gates said he voted in favor of legalizing marijuana in his home state of Washington as an experiment. “It’s probably good to have a couple of states try it before you make it national,” he said.

That was then – a few test states. This is now. With two dozen and counting, what Gates saw as an experiment has become a promising business opportunity for the corporation he started as well as Dinenberg’s start up.