Evolving developments in technology affect almost every aspect of our lives, and perhaps none more so than transport. While some of these developments may not register with us, such as improvements made to fuels or subtle changes to car engines, many of them can be more radical and newsworthy. Two developments that have been growing in popularity worldwide are electric scooters ľ or e-scooters ľ and drones.

But as these technologies grow and expand, there is an inevitability of them having to be regulated. The UKĺs Department for Transport recently announced that it was launching a major consultation program to look at how several ideas can be incorporated into current transport systems and how new ones can be legally utilized. 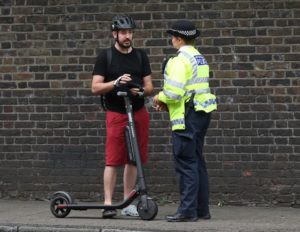 Electric scooters are nothing new. In fact, they date back to the 1890s and there have been various incarnations since then. But it wasnĺt until 1996 that the first mass-produced e-scooter, the Peugeot Scoot’Elec, hit the market. Now many major car and bike manufacturers, including Piaggio, Honda, BMW, and Harley Davidson, have either developed e-scooters or bikes or are in the process of doing so.

UK laws currently only permit the use of e-scooters on private land, though that hasnĺt stopped many people using them on pavements and roads. The UK lags behind many other European countries where e-scooters are fully legal and widely used. But with traffic congestion a major issue ľ thanks in part to single occupancy cars on the road ľ and the environment increasingly in the public consciousness, the government are finally looking at how these scooters may help.

The Department for Transport are looking at allowing local authorities in England to contract with e-scooter companies to provide services. To test out their ideas, the DoT is setting up new transport zones in various cities including Portsmouth and Nottingham. These zones will follow the model of the existing West Midlands transport zone which has already been used for testing new transport policy and technology. 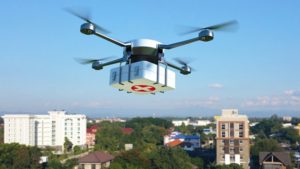 The concept of drone deliveries is another idea that is not new but which looks like it may soon become an everyday sight in many countries. Though most people tend to think that drone deliveries will consist of pizzas or Amazon orders, one area of particular interest to governments is the delivery of medical equipment and/or medicines. This would be of huge benefit to people living in rural areas but would also be advantageous where equipment, such as defibrillators, needs to get to a patient quickly and where traditional road transportation could take too long. And if there has been a natural disaster such as an earthquake or flooding, drones would be the ideal way to get vital equipment and medical supplies to those in need when roads are inaccessible.

Much of the advanced technology for these delivery drones is coming from NASA. For several years, they have had multiple projects looking at various aspects of unmanned flight. Some of the particular aspects that NASA has been looking at includes programs to detect and avoid other aircraft, emergency landing programs, and developing new composite materials to make the drones more efficient.

With the UK having so many rural and isolated areas, and with increased flooding of regions in recent years, the DoT sees the idea of using drones to deliver equipment and other healthcare supplies as an optimum solution.

While e-scooters and drones are the two main focuses of the consultation, there are also other ideas being looked at. The UK transport secretary, Grant Shapps, said in a statement to launch the consultation: ôWe are on the cusp of a transport revolution. Emerging technologies are ripping up the rulebook and changing the way people and goods move forever.ö

One of the other ideas being looked at is to introduce an Uber style Ĺbus on demandĺ service. This, again, is not a new idea; many bus companies have operated such services in rural areas in the past. Other potential alternatives to public transport will also be examined for viability.

With funding of GBP90 million being provided to trial ideas in the new transport zones, some critics say that this figure is too low and that funds will be spread too thinly to get an ideal snapshot of their effectiveness. But given the e-scooters and drones will be the main focus, and further given that there will be companies who see the potential and who will likely Ĺaddĺ to the funding by providing their technology to test, then that 90 million may prove to be good value for money.

While some aspects of this consultation may be long overdue, as the saying goes; better late than never. The potential of some of these ideas to take pressure off the public transport system and to benefit the environment is huge. Hoverboards may still be a dream, but the future certainly got one step closer.

Boom Supersonic ÔÇô the Next Concorde or a Project going nowhere?

GÚraldine Nabout on 04 Dec
Slack: The Fastest Company to a $2 Billion Valuation