Are chat bots the new black?

The U.S. startup Chatfuel is betting on bots as it helps companies create software programs that provide information and services to users inside messenger platforms.

If chat is the next big thing in news and information sharing and bots catch on as effective filters, then the startup Chatfuel may be poised for a heady ride.

Chatfuel, a U.S. company with offices in San Francisco and Moscow, helps companies create chat bots – software programs that can operate inside a messaging service and serve up content and services based on user comments and questions.

The company, which launched in July 2015 under the name Paquebot, has already created more than 130,000 chat bots with more than one million daily users.

Chatfuel’s timing is right. Chat usage is on the rise as more users rely on their mobile devices and bots can deliver information more conveniently than apps. Chatfuel’s bots are intelligent enough to serve up news, narrow the topic based on user comments, and answer questions about news events.

Bots are more engaging than apps

Russian entrepreneur and Chatfuel co-founder Dmitri Dumik said bots provide a more engaging and smooth experience than apps, which are also more expensive for companies to create and maintain.

Dumik said with Facebook likely to open its Messenger mobile chat app to third parties, the demand for chat bots will only increase.

Y Combinator, 500 Startups and the John S. and James L. Knight Foundation, are Chatfuel investors. Chatfuel also attracted investment by Yandex, the Google of Russia in March. Amounts were not disclosed.

Forbes and Techcrunch are among companies that have begun experimenting with Chatfuel bots to connect with their readers.

“Digital news audiences are fatigued by apps, especially news apps. They’re getting overwhelmed by the torrents pushed out on social networks,” Bruce Upbin of Forbes said in a post announcing the new service. News organizations and other companies are realizing that “that the place to reach readers these days are messaging apps.”

Upbin did note that the bot, while efficient at filtering information, has limited intelligence or ability to engage more directly.

To demonstrate its bot, Forbes cited an example of a user researching Elon Musk. The user asks “Who is Elon Musk?” The bot first serves up a short description of the inventor and business magnate. Then the bot follows up with a headline and link to a recent Forbes article about Musk.

While they may prove useful to consumers of news and information, one recent experiment showed the potential dark side of chat bots.

Microsoft developed a chat bot, Tay, who was designed to mimic a 19-year-old girl and engage with users on social media. Tay was programmed with a repeat-after-me function and social media trolls manipulated that to get her to make racist and pro-Nazi comments, including denying the Holocaust. With that, Microsoft was forced to take Tay down.

Tay was different from most chat bots because she was designed to engage with users rather than simply responding to requests for information. Still, it was a cautionary tale about the need to create filters on bots so they are programmed to not say certain things. 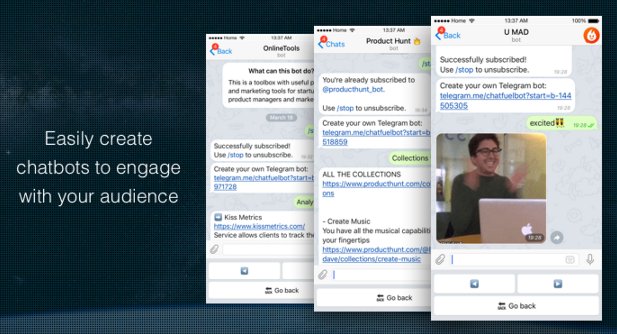 Meanwhile, the rise and fall of Tay is unlikely to deter the growth of usage of chat bots, especially if Facebook enters the field.

Facebook earlier this year invited some developers to quietly build bots and other interactive experiences in Messenger for shopping, booking travel and gathering information.

Users can send text messages to the bots on Messenger and get replies that include information, images, purchase information and buy buttons. The service would be linked to Messenger’s built-in payment system.

For now, Chatfuel bots operate only on Telegram, a messaging app that has opened itself to third-party bots. But as Dumik noted, if Facebook Messenger opens up to third-party bots as expected, the game would change significantly.

“Facebook Messenger is the driver,” Dumik said. When Facebook opens up to third-party bots, chat bots will become a critical audience retention tool.