CIMV : towards an alternative to fossil-fuels

The technology developed by CIMV (Compagnie Industrielle de la Matière Végétale) is an incredible industrial breakthrough. The technology used by this company has the ability to separate three different parts of plant matter, lignin, cellulose, and hemicelluloses. The separation process does not cause any harm to the environment either.

Ever since its foundation in 1998, CIMV’s primary goal is to implement its bio refinery process. From the beginning, CIMV has been devoted to innovation, ecology, and industry. 10 years of laboratory work and the building of a pilot plant is what took place in order for this company to optimize the technological process. The process can now promote a wide range of renewable lignocellulosic plant resources. The technology utilizes the non-food part of the plant or crop (straws in cereal crops, sugar cane bagasse, corn stover or fibrous plant stalks).

It is no surprise that we are quickly depleting the Earth’s natural resources, such as crude oil, coal, and natural gases. This correlates directly with the economy. In 2015 oil is costing $53/barrel and it is estimated that by the year 2025 oil will cost $103/barrel. Experts and investors have been following this trend and recognize that a change is needed. One particular investor is Pierre Falcone. Mr Falcone is the owner of Pierson Capital group and they have great interest and have invested in what CIMV is working on achieving. Pierson Capital is known for investing in breakthroughs of high and advanced technologies and agricultural/agro-industrial products. Mr Falcone believes that investing in CIMV will be highly profitable due to the high yield production of fermented ethanol from the CIMV process.

There has been a significant increase of awareness in climate change. The increasing scarcity of fossil-fuels and natural resources paired with the climate’s impact on biodiversity leave a large gap for innovation. Oil is a natural resource that our planet is quickly going through. The major challenge today is to find an alternative to oil, as best as possible, that can be used in as many applications as possible, without disrupting the ecological balance. Lignocellulosic biomass is in abundant supply and is the front runner to become an oil alternative. CIMV is the only company in the world that can separate and utilize 100% of the plant resources that are used in creating this biomass.

A rising global issue is the proper way to recycle plant resources for non-food purposes. The CIMV technology only recycles plant residuals, leaving the food part (fruit or seed) for the food markets. CIMV is in a position to counter one of the major challenges presenting itself to the farming sector which is how to fully utilize arable lands, while prioritizing their food productions. 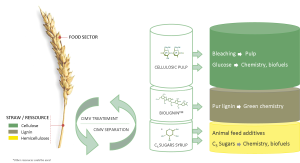 The CIMV process uses a variety of renewable and non-food related, lignocellulosic resources, while not changing its technology. The CIMV process cleanly separates the three main parts of lignocellulosic biomass into three more intermediary products for biotechnological and chemical industries. The three intermediary products are: Biolignin™, cellulose and glucose, and sugars syrups.

With the growing popularity of this technology and process, CIMV is going to be creating processing units. This will in turn create revenue, business opportunities, and ultimately aid the economy by creating employment in rural and farming areas.

Apart from being the only bio refinery company around the globe, what makes the CIMV technology so advanced is that it extracts and promotes a non-deteriorated lignin. This positions CIMV as a credible alternative to oil due to the production of bio-massed energy and commodity products with the same quality as oil.

In 2006, the creation of an industrial plant in Pomacle, Champagne-Ardenne, France, marked the final stage before an effective industrialization of the CIMV technology. This instalment also aided with the validation of the technology. 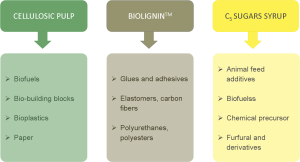 Biolignin™ is the world’s only non-deteriorated lignin. A lignin is a biopolymer that is very difficult to extract and ultimately use. This non deteriorated lignin, produced by CIMV technology requires few processing stages and is a raw material that can be used to manufacture many of the same products currently made by refining and oil processing. Along with that, the use of CIMV Biolignin™ creates a massive reduction in greenhouse gases and is a direct substitute for petroleum based products.

Cellulose that is treated by the CIMV technology produces a pulp nearly identical to that of hardwoods, thus making it able to replace it. The exclusive technology makes the CIMV pulp from annual plants and also does not use any chlorine by-products. The technology also dodges a major problem in the pulp/paper industry, the presence of silica and straw in annual plants.

CIMV technology produces a glucose that is of non-food origin but of food quality. CIMV glucose can be used to promote biomolecules and second generation biofuels in industries, with no extent to the food sector. Another advantage is this is a product that can be used directly in white biotechnologies.

The final product, CIMV sugar syrups, comes from all the plant matter that is not lignin or cellulose. These sugars contain useful properties to be applied to animal feed. The sugars can replace formalin that is used in texturing and tanning agents in the animal feed. Other research conducted by CIMV show that refining these syrups are able to produce biomolecules.

CIMV and Technip are working in close collaboration with each other for the building of the first bio refinery plant. The location, yet to be announced, will be close to biomass resources and will work with local feedstock suppliers. The creation of this unit will aid the local economy by bringing more jobs and secure additional revenues for local resource handlers. 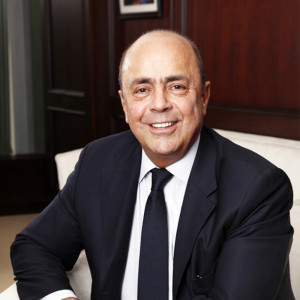 The development of such technologies have been made possible by the collaboration of CIMV with several leaders such as Technip (engineering and energy industry) and several Nobel Prize winners in the field of chemistry.

CIMV is the only company capable of optimally extracting these three main components: (cellulose pulp, Biolignin and C5 sugar). CIMV has obtained over 20 million euros from INRIA’s BIOCORE project. CIMV also participates to two other European projects: the research program INNOBITE, to which it provides silica, Biolignin™ as well as cellulose to all of the project’s partners; and the European project BIOMIMETIC, to which it provides Biolignin™.

On top of these European initiatives, businessmen such as Pierre Falcone, CEO and founder of Pierson Capital, have decided to invest in long term ventures. CIMV is one such long term investment opportunity, and Pierre Falcone believes in bio refineries now more than ever. He has already invested in the company which he finds ‘both sustainable in its approach to product development and essential in order to be less dependent on fossil fuels over the coming decades”.